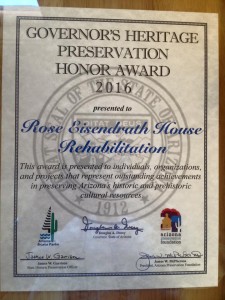 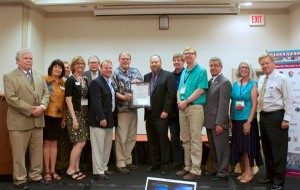 Tempe’s Eisendrath Center for Water Conservation has received a prestigious historic preservation award for the rehabilitation of the house that was completed last fall. The project is a recipient of the 2016 Governor’s Heritage Preservation Honor Award, which recognizes outstanding achievements in preserving Arizona’s historic resources. The awards are given by the Arizona Preservation Foundation and Arizona State Historic Preservation Office. The Eisendrath House is one of ten winners statewide.

“We are so proud to receive this award and to be recognized for a project that is important to the fabric of our community,” said Tempe Mayor Mark Mitchell. “We have preserved an important piece of our city’s history, and we’ve turned it into a community asset.  Rose Eisendrath’s house has been transformed into the Eisendrath Center for Water Conservation and will also be used as a one-of-a-kind special event venue for meetings and historic tours, making it an attraction for years to come.”

The house was built in 1930 as the winter residence of Rose Eisendrath, a wealthy Chicago widow who was turned away from several local hotels because she was Jewish. Over the past ten years, it has been rehabilitated by the Rio Salado Foundation in partnership with the City of Tempe. Donors to the project are: SRP, SRPMIC, Vestar, American Express and the Tempe Historic Preservation Foundation. Some of the rehabilitation highlights include:

The Eisendrath Center for Water Conservation Visitor’s Center is now available to tour by appointment on Thursdays and Saturdays from 10 a.m. to 3 p.m. Reservations can be made by calling 480-858-2202. The entertaining spaces can be rented for special events, receptions, corporate conferences, dinners and weddings. Adjacent to the Eisendrath House is the SRP Center for Water Education, which can also be reserved for meetings or seminars by calling 480-350-2668.

Click here to see a video about Eisendrath House.

The Rose Eisendrath House Rehabilitation has been a 17-year endeavor to repurpose this unique historic adobe house in the rolling hills of Tempe’s portion of Papago Park. Local architect Robert T. Evans designed the two-story Pueblo Revival Home in 1930 as a winter home for Rose Eisendrath, the widow of a Chicago glove manufacturer. Rose passed away in 1936 and the property was subsequently sold in 1940. It had various owners until the City of Tempe purchased it in 2001. Several years of planning, fundraising, and community support went into moving this project forward. The project received a Heritage Fund grant and pass-through funds from the State Historic Preservation Office, in addition to support from the City of Tempe and the Rio Salado Foundation partnership with the Salt River Pima Maricopa Indian Community, Vestar, Salt River Project, American Express, Tempe Historic Preservation Foundation, and an anonymous donor. The project team, which consisted of Robert Graham of Motley Design Group; Mark Vinson of the City of Tempe; Janie Ellis, a Special Project Management Consultant with Sundt; and Mark Schaefer of The Schaefer Companies – overcame many challenges during the time it took to complete the project. The rehab – and the list is significantly long – included selective demolition; new utility connections; site-work; adobe and stucco repairs; floor and roof framing repairs, including an innovative structural system in the former living room; repairs to the doors, windows, lintels, and vigas; ADA accessible restrooms, ramps, and lifts; conversion of the swimming pool to cistern for retention; and recirculation of rainwater for landscaping. The rehab also included construction of a new conference and restroom building separate from the house. Finished in November 2015, the property was converted to the Eisendrath Center for Water Conservation at the Carl Hayden Campus for Sustainability – complete with facilities for community outreach in sustainability, water conservation, and historic preservation education.